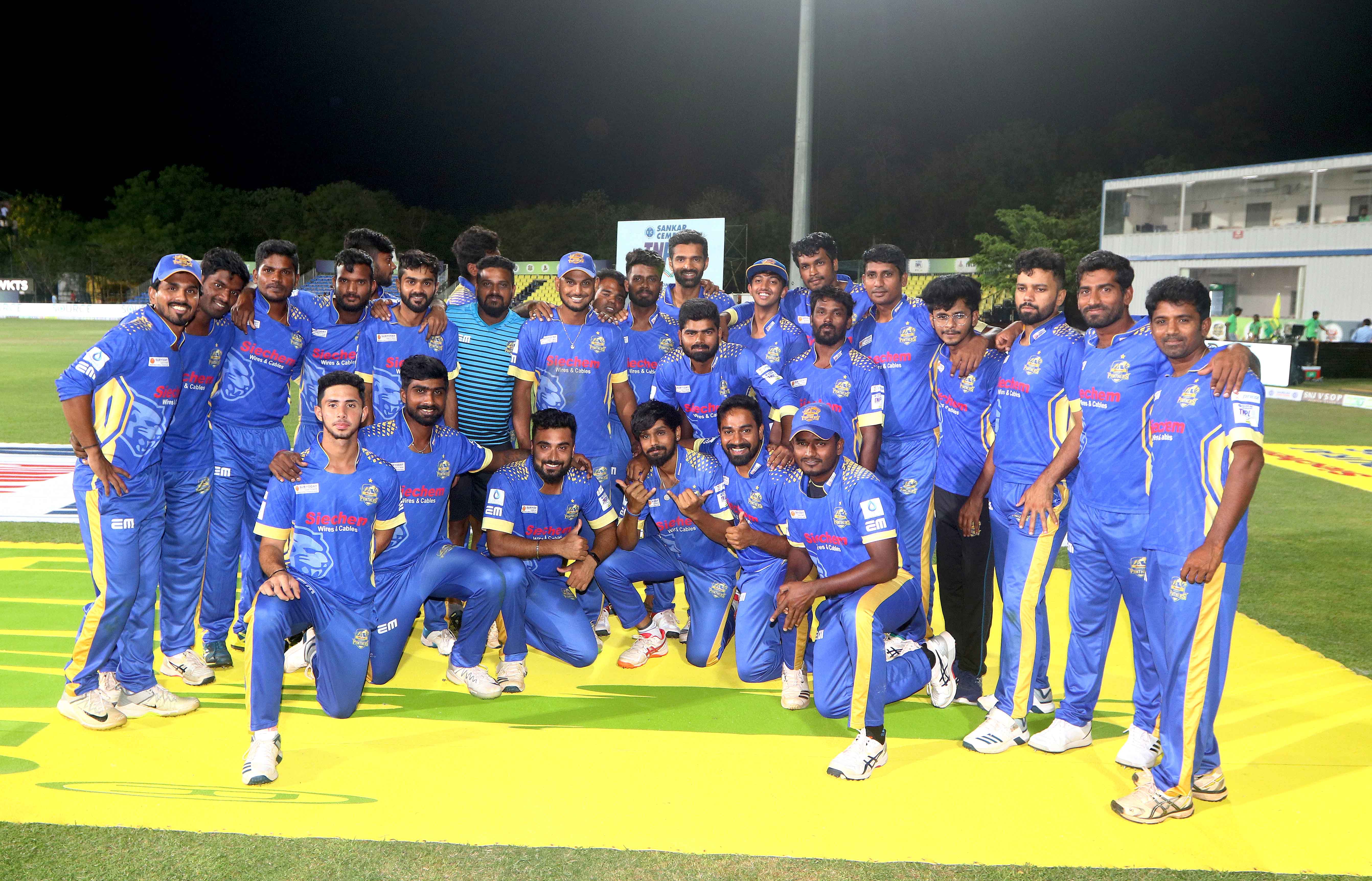 Chasing 152 runs for victory in the Eliminator, SMP attained the winning run on the last ball to finish on 152-5, for a five-wicket win. VBKV had earlier raised 151-6 in 20 overs on the back of a brilliant innings of 77 not out (52 balls, 6 fours, 4 sixes) from all-rounder Sanjay Yadav.

The defending champions will now meet last year’s finalists Dindigul Dragons in Qualifier 2 at the NPR College ground, Natham, Dindigul on Tuesday (August 13). DD had lost to Chepauk Super Gillies by five runs earlier in the day in Qualifier 1.

The seasoned KB Arun Karthick (64 off 39 balls, 7 fours, 2 sixes) guided SMP’s chase despite surviving a close call in the third over. The 32-year-old was dropped on 10 by VBKV captain Aparajith, running backwards at cover failed to latch on to a mistimed drive by the batsman off left-arm pacer Rangaraj Suthesh. The team score at that stage was 14-1.

Barring that reprieve, Karthick was in cruise mode throughout his innings, latching on to the loose balls and scoring at a decent rate as well. Along with captain Shijit Chandran (21 off 25 balls, 3 fours), Karthick added 52 runs in 44 balls.

Chandran’s exit, caught by a diving Aparajith at extra cover off left-arm spinner Aushik Srinivas, gave a bit of hope for VBKV. They continued to hustle the batsmen and succeeded in picking two more wickets, including the prized scalp of Karthick.

Wicketkeeper Nilesh Subramaniam was out in the deep, going for a big hoick against left-arm spinner Sanjay Yadav and then Karthick was run out in the 14th over attempting a second run. The former SMP captain failed to beat an accurate throw from deep mid-wicket fielder Francis Rokins.

When Karthick was out, SMP still needed 37 from 52 balls. The VBKV bowlers, especially left-arm spinner NS Harish and pacer Suthesh conceded just nine runs in 12 balls to bring the equation down to 14 off six balls.

Jagatheesan Kousik (26 not out off 19 balls, 2 fours, 1 six) and Abhishek Tanwar (15 not out off 7 balls, 1 four, 1 six), who had kept SMP in the hunt after Karthik’s dismissal, overcame the tense moments with their 31-run alliance off 16 balls.

In the last over bowled by Yadav, Kousik broke free with a rousing six over deep mid-wicket and followed it up with a straight-driven four. It was down to one run off the last ball and Tanwar inside-edged a sweep to square leg for the winning run.

An upbeat Tanwar was delighted with the outcome. “It was a tense game but I’m happy that we just came out of it.”

VBKV left-arm spinner Aushik Srinivas felt the game could have gone either way and the team that held their nerves in the end won. “It was a very close game, equally contested by the two teams. But in the end they were able to hold on to the pressure. They held their nerves very well. We probably got caught up by the fact that we are playing our first knockout game in four years. May be with a little bit of experience and playing more knockout games, we will do better,” he said.

Earlier, a fighting knock by Yadav resuscitated VB Kanchi Veerans from a disappointing start that saw their top three batsmen – openers Vishal Vaidhya (4), Suresh Lokeshwar (0) and captain Baba Aparajith (13) – back in the pavilion by the 5th over.

The 24-year-old Yadav, who came in at No.3 shepherded the innings brilliantly despite losing partners at the other end. No.7 Mokit Hariharan, playing his first match of the season, matched Yadav in defying the rival attack and together they lifted VBKV from the depths of despair.

When Hariharan walked in at the fall of Rajagopal Sathish (17 off 9 balls) in the 11th over, VBKV were 60-5. The 19-year-old went about the repair job with his senior partner and together they raised 76 runs from 51 balls.

The tall Yadav used his long reach with telling effect in the final two overs smashing three sixes and two fours as VBKV collected 30 runs. He hit back to back sixes off left-arm spinner Rahil Shah and then followed it up with a four off pacer Abhishek Tanwar’s third ball before finishing the innings with a towering six over long on and a four.

VBKV were in trouble no sooner than they had won the toss and decided to bat first. Opener Vaidhya was out to the fifth ball of the match, edging Tanwar and wicketkeeper Nilesh Subramaniam dived full length to his left to pluck a brilliant catch. In the next over, Lokeshwar was out for a golden duck driving Kiran Akash uppishly to backward point.

Sathish tried to speed up the scoring rate by sweeping Shah off the first ball he faced and in the bowler’s next over clouted a six and four off the mid-wicket region. The bowler had the last laugh when the batsman failed to keep a sweep shot down and was caught by a diving Kiran Akash at short fine-leg.

Yadav continued from where Sathish had left by clobbering a six and two fours off Shah’s third over as he found in Mokit an able ally.

The Eliminator was the 50th TNPL match to be staged at the ICL-Sankar Nagar ground.