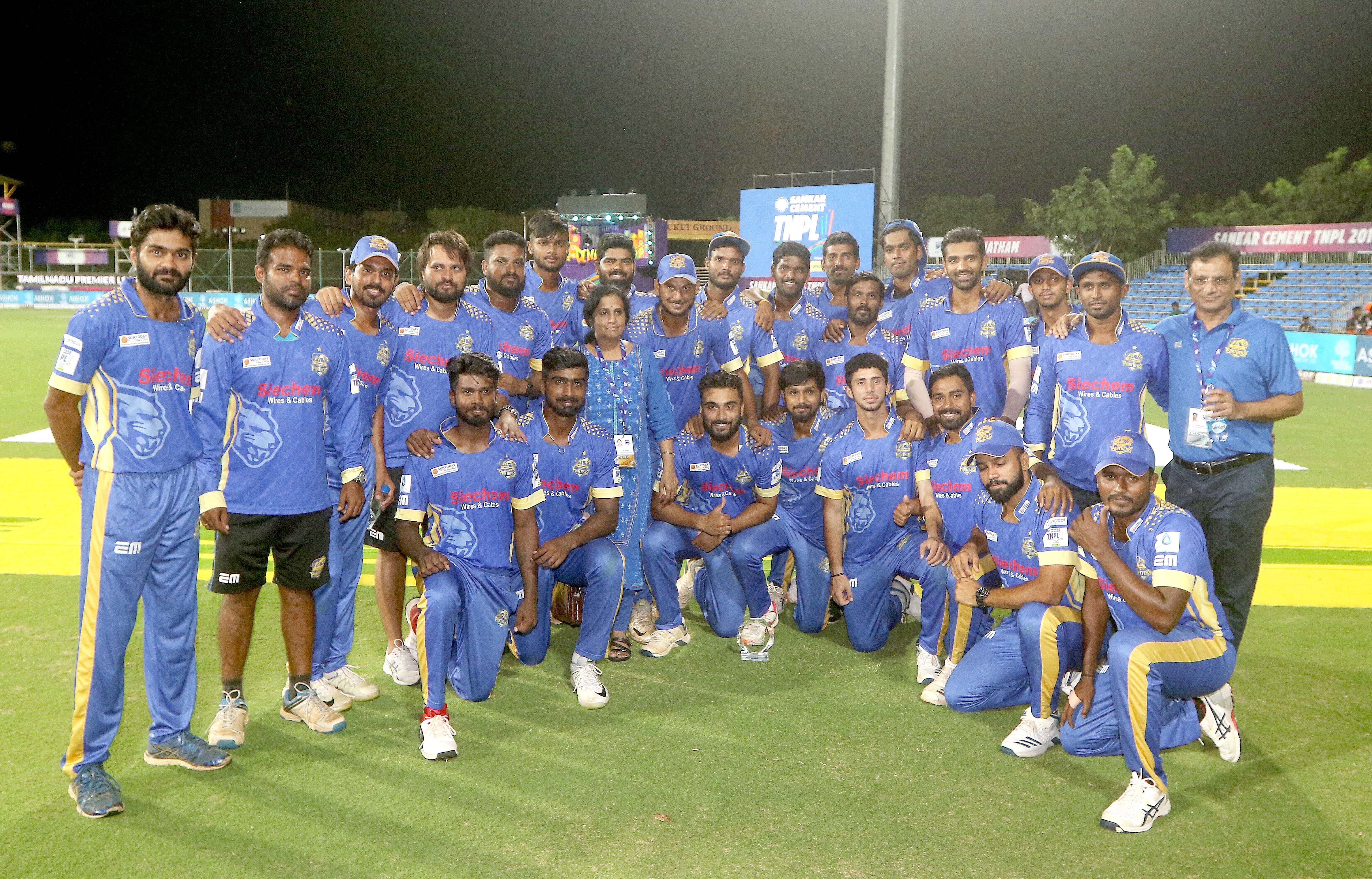 Natham, Dindigul, July 31: Siechem Madurai Panthers put their Sankar Cement Tamil Nadu Twenty20 Premier League (TNPL) campaign back on track with a nail-biting victory in the Super Over after their duel against Ruby Trichy Warriors ended in a tie at the NPR College Ground, here on Wednesday.

In the resultant Super Over, SMP all-rounder Abhishek Tanwar stole the show by smashing two sixes and then dismissing both RTW batsmen Murali Vijay (0) and Mani Bharathy (1) to seal the victory by one-over eliminator.

KB Karthick was out for the first ball bowled by medium-pacer P Saravana Kumar but Tanwar smashed two sixes before getting out on the fourth ball to set a target of 13 for RTW. But they could only muster 3 runs and lost both their wickets in six balls.

There appears to be some connection between Murali Vijay and tied-matches this season. Both the matches that he has played have ended in a tie and defeats for his team.

While SMP rose to the fourth spot in the eight-team standing with their second victory in four matches, RTW continued to search for their first victory after four matches.

SMP appeared to be cruising at 81-2 after nine overs, Karthick had set them up with a fluent 26-ball 46 (7 fours, 1 six). But medium-pacer Lakshminarayan Vignesh let the cat among the pigeons with a double strike in the 10thover. Karthick trying to loft the bowler over his head holed out to Mukunth at long on and off the next ball, SMP captain Shijit Chandran (12) edged a length ball to the ‘keeper.

SMP suddenly were four down for 81 with two new batsmen at the crease, needing another 62 runs from 64 balls. Jagatheesan Kousik kept them in the hunt compiling the runs with some sensible batsmen. But Vignesh was not finished yet as he returned to trap all-rounder Abhishek Tanwar (1) lbw. It was a superb comeback by the 30-year-old bowler, who had been hit for 17 runs in his first over by Karthick. In his next three overs he took three wickets (3-0-11-3) to finish with 3-28 from his four overs.

In between, medium-pacer P Saravana Kumar dismissed Sabin Somatha Karnawar (6 off 14 balls), who had strung a 24-run partnership off 30 balls for the fifth wicket.

With Kousik going strong at the other end, SMP appeared to hold the edge as they needed 12 runs from the last 12 balls. But Saravana Kumar (4-0-21-1) conceded just four runs in the 19thover to leave Kousik and Ramachandran Mithun eight to get from the final six balls.

Left-arm spinner MS Sanjay, playing his first match of the season, did not give away any easy runs and the equation was down to one run from the last ball. The onus was on Mithun to bail SMP out but Sanjay fired a fuller delivery outside the off-stump which the batsman missed leading to a tie.

Earlier, SMP did a remarkable job of first restricting RTW despite international star Murali Vijay threatening to take the game away from them at one stage. At the half-way mark, RTW were 73 for no loss but in the next 10 overs could only muster 69 runs for the loss of six wickets.

Left-arm spinner Rahil Shah (4-0-17-2) was the best bowler in the SMP pack, conceding all his runs in singles.

Put into bat, RTW openers Vijay and Karunakaran Mukunth (32 off 32 balls, 3 fours) strung their best first wicket partnership of the season, raising 98 runs in 13.3 overs. The 35-year-old was a class act throughout his unbeaten innings. A series of fluent drives, that netted three fours, off pacer Abhishek Tanwar got him going and he had set himself nicely for a late charge.

At the 15-over mark, RTW score was 105-2 and with Vijay at the crease, a big total was on cards. The alliance of 24 runs off 17 balls with wicketkeeper batsman Mani Bharathy (21 off 12 balls, 2 fours, 1 six) for the third wicket was also looking good at that stage.

The slide began with Bharathy’s dismissal in the 17thover bowled by Kiran, who was hit for a six and a four in succession. The bowler got his revenge when he got through the batsman’s defence.

Vijay’s last scoring shot was a six in the last over bowled by Tanwar as RTW settled for 142-6 in 20 overs.